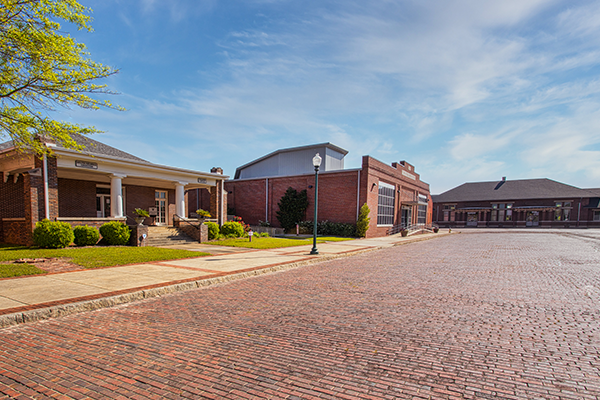 A Muskogee Creek word that generally means "flint picking up place," among other translations, Thronateeska is a name for the area around present-day Albany and the Flint River in Southwest Georgia. The Lower Muskogee Creek Tribe east of the Mississippi River is headquartered at Tama Tribal Town, Whigham, Georgia.

In 1974, concerned and community-spirited citizens championed the cause for revitalization of the historic downtown railroad depot area. Thronateeska Heritage Foundation, Inc. resulted from the merger of the Southwest Georgia Historical Society, organized in 1969, and the Albany Junior Museum, Inc., founded in 1959 by the Junior League of Albany.

Today, Thronateeska’s campus, known as Heritage Plaza, includes the Science Museum, the Wetherbee Planetarium and the History Museum, all located on the only remaining brick street in Albany.

Through Thronateeska’s efforts, the 1913 Union Station depot was preserved as a legendary landmark, converted into the History Museum, and listed on the National Register of Historic Places in 1975. The History Museum features changing exhibits in two galleries.

The Science Museum, which also houses the Wetherbee Planetarium, was constructed in 2008, incorporating architectural features of the original 1926 Central Georgia Roundhouse on the façade of the building. The Science Museum includes interactive exhibits and hosts regular science-based programming. The Wetherbee Planetarium features a 40-foot diameter HD fulldome screen and shows a rotating schedule of planetarium shows.

In 2014, the South Georgia Archives was added on to the historic Fryer-Merritt House, which houses Thronateeska’s administrative offices.

The Tift Warehouse, constructed in 1857 as the original passenger and freight depot, the REA building, and Albany’s last remaining brick street are also listed on the National Register as Albany’s Railroad Depot Historic District.

To provide an environment where human, natural and physical sciences can be explored to gain a better understanding of our changing world.